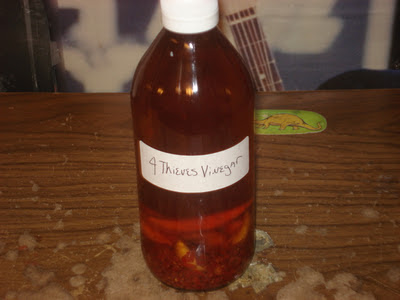 Four Thieves Vinegar is a potion used in various folk-magic and folk-medicine traditions, especially that of hoodoo/rootwork, for the purpose of personal protection, the prevention of illness, the banishing of troublesome people, and the cursing of one's enemies.

According to legend, there was a band of four thieves who in the middle-ages made a fortune by stealing from the bodies of people who had died from the black death or bubonic plague. When the criminals were arrested they where advised their lives would be spared if they divulged the secret method they used to prevent becoming infected. That secret would become known as four thieves vinegar. Another origin of the concoction is that the name 'four thieves' is a corruption of "forthave's vinegar", which was a popular vinegar remedy of it's time. Despite the actual origin of four thieves vinegar, the use of herbs steeped in vinegar is not new and is among some of the earliest medicines or remedies used by ancient peoples.

Take a bottle of vinegar. Remove the label (may have to soak in warm water first). Open the bottle of vinegar and pour up to half of it into a cup which is set to the side. Add the ingredients in whatever amounts one wishes. Top the bottle off with the remaining vinegar in the cup. Close the bottle and set it someplace dark for approximately a month before use. After that time one can strain and re-bottle if one prefers, though I prefer to keep the herbs in the bottle.

A basic guide to using Four Thieves Vinegar can be found below:

-To reportedly prevent becoming sick Four Thieves Vinegar that is concocted to be consumed can be taken by the spoonful each day. One can also gargle with Four Thieves Vinegar, which is said to help prevent throat and mouth infections, as well as help with gum disease. A rag or cloth can also be soaked with the mixture and sniffed to help clear the nasal passages and reportedly prevent sinus infections.

-For person protection add Four Thieves Vinegar to one's bath water. Your enemies will not prevail against you. This would be an example of a white magic spell for protection.

-To banish a troublesome person, take a bottle or container of Four Thieves Vinegar, open it, and throw the liquid on the persons door or else dump it on the person's porch while cursing them and telling them where they should go or what you want them to do, such as; "get the f*ck out of this neighborhood!", "get the f*ck out of town!", or even, 'f*ckin' go to hell!'. This is of course a black magic use for Four Thieves Vinegar.

-To curse an enemy, take a personal item or concern from the victim, such as some hair, nail clippings, a photograph, etc., and place it in a bottle with nine pins, 9 needles, and 9 nails. Add to it graveyard dirt and then top it off with Four Thieves Vinegar. Shake the bottle while cursing the enemy and then bury it on their property, preferably where they will step over it. This would also be an example of a black-magic spell that incorporates Four Thieves Vinegar.

Additionally, one can use Four Thieves Vinegar in any spell that calls for vinegar.

Many occult shops sell what is claimed to be Four Thieves Vinegar but which is nothing but plain white vinegar. If by chance you do stumble upon a location that sells genuine Four Thieves Vinegar make sure to ask the owner or shop help if the mixture is safe for consumption before purchasing.

Vinegar of the Four Thieves

***Note: I present this information for educational purposes only. I do not claim Four Thieves Vinegar has any medicinal value but rather provide information on how it was used in the past as part of folk-magic and folk-medicine. I also do not advise or condone any black magic use for Four Thieves Vinegar.
Posted by Doc Conjure at 12:57 PM

CURRENT MOON
moon info
WANTED: YOUR STORIES OF REAL MONSTERS! Have you had an experience with a real monster or paranormal/supernatural creature or entity and want to tell someone about it? -Then email me! I love hearing people's stories with the unknown. Depending on your permission, I may even use your story in a blog entry. Also, if you are an individual who identifies as a Witch, Vampire, Werewolf, Fairy, Alien or other supernatural being, feel free to shoot me an email as well and tell me about your experiences. I would love to interview you! Your anonymity, if so chosen, is guaranteed. Email your experiences to: TheDemoniacal@Yahoo.com