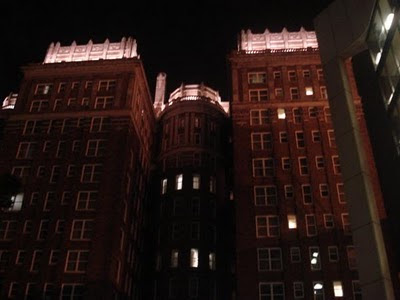 In 1994, my friends Michelle, Beth, Jeremy, Kevin, myself and a few others use to hang-out at the then abandoned Skirvin Hotel and the adjacent parking garage referred to as the 'colored elevators', due to the fact that the elevator doors of each floor were once painted a different color. (If you take the stairs you can still see the colors of each floor, however the elevator doors have been painted black.)

We were attracted to the hotel due to it's spooky atmosphere and we liked to explore the area. It wasn't long before we befriended a security guard at the hotel named John (not his real name, though he would probably be in his 80s if he is still alive today).

When John's shift was over we would all go to a nearby Kettle's restaurant and drink coffee and talk. John soon told us some remarkable tales, mainly about the haunted Skirvin hotel.

According to John, the hotel is haunted by the spirit of a former maid named Effie, as well as her infant.

John claimed that back in the 1920s, the owner of the hotel had an affair with a maid named Effie and that Effie had become pregnant. At the time this was considered a scandal that could destroy the owner's reputation so a deal was struck. The owner would keep Effie in a room on the eighth floor (formerly room 832) and would have food and items brought to her as she needed. When the baby was born, the owner would give Effie some money and she would be off on her way, presumably never to make any further contact.

When the baby was born, Effie naturally assumed her stay was over. Unfortunately the owner had decided that he wanted Effie to remain until the child was weaned. It was at this point that Effie's mental health began to decline. It wasn't long before she took her baby in her arms and jumped out the window.

According to John, female guests on the eighth floor would complain of not getting any sleep due to hearing the cries of an infant. However checks revealed that no family with an infant was staying on the floor.

John claimed that Effie wanted to possess him and wanted him to join her in the afterlife. John claims that one day she manifested in his truck, pressing down hard on the gas pedal. John described it as if he leg was paralysed and that he couldn't lift it up. He claimed he heard Effie laughing. I actually can't recall if John said he got into an accident or if he was able to escape her influence. I will have to ask my friends to see what they remember.

Also of note was John's mentioning that construction men doing repair or renovations would come in to find that their tools and items had been moved or rearranged. They also noticed the smell of lavender perfume.

One of the most fascinating things John stated was that either OSU or OU had sent a parapsychology team to investigate the hauntings. The team set up video cameras and reportedly caught a maid's cart moving down a hall all by itself. Reportedly the then owners of the hotel paid the team off fearing that negative publicity would scare off guests. The footage is still said to exist in a secret vault, somewhere.

Other things to consider about the Skirvin Hotel was that back during the prohibition era there was a rumored speak-easy in the basement. Seances were also said to be regularly carried out on the roof of the building. When the hotel closed in the 80s, it became the reported site of devil worshippers who supposedly spray-painted satanic graffiti inside the location. A couple of dead homeless people were reportedly discovered in the abandoned building and in the 90s a couple committed suicide by jumping off of the top of the colored elevators which is almost joined to the hotel. The male was still a teenager and the female was older, in her later 20s or even 30s. His parent's reportedly demanded they break off the relationship due to the age difference. The pair decided if they couldn't be together in life, they they shall be united in death. One of them died instantly. The other one lingered for a couple of days before succumbing. For those who may be interested, it is on the top of the colored elevators that one is supposedly able to see the warehouse where a vampire coven dwells, supposedly ruled by a 2,000 year-old female vampire.

The Skirvin Hotel reopened as the Skirvin Hilton in 2007. In January of 2010, the haunting attracted media attention when members of the New York Knicks blamed the haunted hotel for their loss and reported problems sleeping due to fear of Effie.

My Confession: I was the first to publicise the hauntings. In the late 90s I noticed that Skirvin Hotel did not appear on the lists of reported haunted sites in Oklahoma. I submitted the stories told to me by John to a ghost website who then published it, retracting my name and having it submitted by "anonymous". When I contacted the website to have them include my name they ignored me. Since then the story has appeared on countless websites and has even appeared in books.

If you are in the downtown Oklahoma City area, do check out the Skirvin Hilton Hotel. You won't be disappointed. Why not reserve a room on the eighth floor? -My friends and I still plan on doing so someday!

The Skirvin Hilton Hotel is located on the corner of Broadway and 1st street in downtown, Oklahoma City.

Pan Head, atop columns inside the Skirvin (see below) 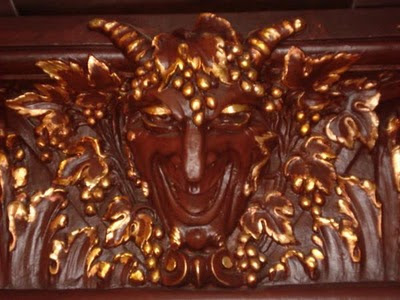 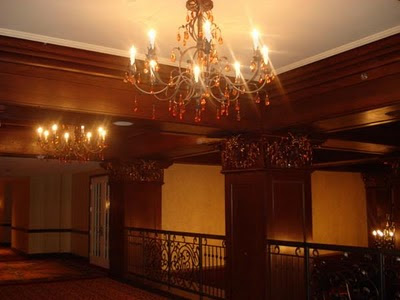 My friend Michelle, posing on a "Jean Harlowe-esque" or Art Deco chair 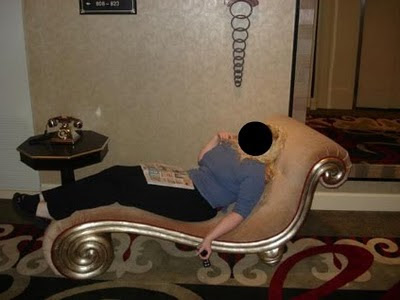 Atop the colored elevators, Skirvin in background 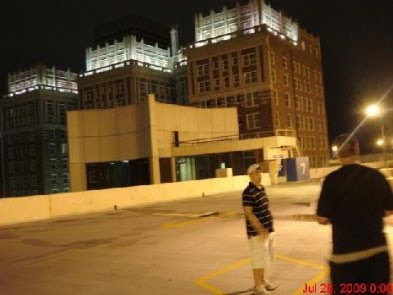 The room where Effie reportedly leapt to her death 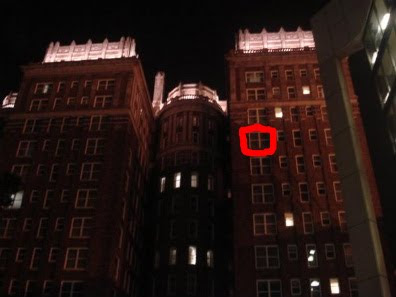 Note: Somewhere along the way people started saying it was the tenth floor where Effie stayed. Nope. It's the eighth floor. More precisely, it was room 832. However, since the hotel has been remodeled there is no more room 832. I believe they combined rooms during the renovation to make a bigger room.

Effie, Falling From The Skirvin Hotel

I saw Effie fall way back in 1923.
She took her baby in her arms and jumped.
I saw her fall.

I blamed Bill.
I told him not to mess with maids
but he said he liked the 'hanky-panky'.
He said Effie's short, red-skirt
sure was appealin'.

Did he think he could keep her
imprisoned in that room with only one window?
I knew Effie would not be his
jack-in-the-box.

I know sometimes one should hush
and not speak ill of the dead
even still, I saw Effie fall
and I can hear her baby crying.

*Addendum: I got the feeling that her name really isn't Effie but rather "Julia", but hey, John told me her name was Effie, so go figure. Also, like many hotels, the Skirvin skips the thirteenth floor. It goes from the twelfth floor to the fourteenth floor. It's because of the superstition surrounding the number 13.

I don't know why I'm so fascinated with the building. Perhaps it's because I love haunted places. Perhaps it's because the hotel originally opened on my birthday back in 1911. I'm not quite sure. However, What I do know is that the Skirvin Hilton Hotel is perhaps one of the most beautiful hotels in Oklahoma, if not the southwest, and is a must see for visitors. If you are adventurous, reserve room 822. I believe this is the room that is closest to the area "Effie" supposedly took her life.

*Is it real? Well, approach it from the stance of a folklorist. I can't say that the Skirvin is really haunted. Instead, I would respond that the tales of the haunting make for one good ghost story!
Posted by Doc Conjure at 2:52 PM

CURRENT MOON
moon info
WANTED: YOUR STORIES OF REAL MONSTERS! Have you had an experience with a real monster or paranormal/supernatural creature or entity and want to tell someone about it? -Then email me! I love hearing people's stories with the unknown. Depending on your permission, I may even use your story in a blog entry. Also, if you are an individual who identifies as a Witch, Vampire, Werewolf, Fairy, Alien or other supernatural being, feel free to shoot me an email as well and tell me about your experiences. I would love to interview you! Your anonymity, if so chosen, is guaranteed. Email your experiences to: TheDemoniacal@Yahoo.com