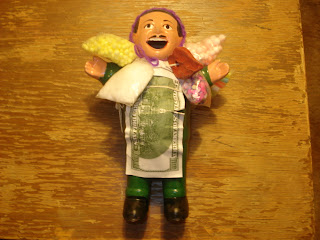 Ekkeko (pronounced "e-kay-ko") is the Incan hearth god associated with luck and prosperity.

Appearance: A small man with various objects tied to his body. For images of Ekkeko, click HERE.

Lore: The worship of Ekkeko continues into present times with the keeping and honoring of Ekkeko dolls, small clay or porcelain dolls of a man with an open mouth and with various items tied to his body. The Ekkeko dolls are honored each year with offerings. According to belief, if a symbolic representation of one's wish is tied to the Ekkeko doll before January 24 then the wish will be granted during the new year. Offerings of candy, tobacco, sugar, or other items usually in a small bag can be tied to the statue as well. Once an item is tied onto the Ekkeko doll it must never be removed. Ekkeko loves offerings of lit cigarettes which are placed in the mouth of the Ekkeko doll and allowed to burn out. According to legend, the length of the ash of the cigarette, without falling, indicates how much good luck the owner of the Ekkeko doll will have in the new year. (Note: Most cigarettes in the U.S. are made with fire safety paper, meaning that if a lit cigarette is left out then it will extinguish itself. They do this to help prevent fires. On the sides of the cigarette pack will be "FSC" or some variation indicating it is fire safety paper. This means you can't use it as an omen to determine how much luck you will have in the new year.)

Powers: Ekkeko has power over luck and prosperity and can grant wishes.

Defense Against Ekkeko: Ekkeko is generally no threat to humans. However, only those who can handle maintaining an Ekkeko doll should own one. If an owner foolishly neglects or abuses the doll then perhaps Ekkeko might punish the person with bad luck.