The Seven Sisters Of New Orleans 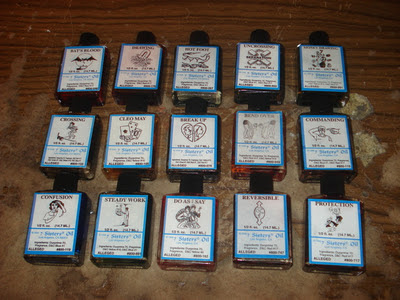 Appearance: According to lore, the Seven Sisters were almost identical in appearance and had the remarkable gift of retaining the youthful appearance of women in their 20's well into old age.

Lore: According to lore there is some controversy as to whether or not the Seven Sisters were seven separate women or were merely one woman, possibly pretending to be multiple people. According to at least one of the informants of Harry Middleton Hyatt, "The Seven Sisters" were actually one woman who tricked clients by changing her clothing. Another informant claimed that the"Seven Sisters" were but one woman who herself was a seventh sister, as in that she has six sisters. This last informant tells a far more believable story as the seventh son or daughter was believed to have been magical, either possessing blessings or curses, such as the gift of prophecy or even becoming a werewolf! To this day there are individuals who insist that the Seven Sisters were seven different women. It should also be stated that there is a tendency for imitation in the magic business, so it is possible that multiple women took on the name of "Seven Sisters" in order to tap into the fame and lore surrounding the original sisters.

(Did you ever hear of the Seven Sisters down in New Orleans?)

Well ah know of 'em, but de way ah understan' 'em, dere not de Seven Sisters - no. It's a sister called de Seven Sisters but it's not but one of 'em. Dere's workers an' people dat has 'em [claim] dey know 'em - dey think it's seven of 'em, when it jes' her - de Seven [Seventh] Sister, lak a person bo'n de seventh day of the seventh month.

Powers: The Seven Sisters of New Orleans were Hoodoo women, meaning they possessed the supernatural powers associated with conjure work. Additionally the sisters were believed to be powerful psychics or clairvoyants, and were rumored to be able to read the minds or futures of people merely by looking at them. The Seven Sisters were also blessed with the ability to retain a youthful appearance well into their senior years.


Spiritual Products: The Seven Sisters of New Orleans line of spiritual products is owned by Indio/Wisdom. The oils, powders, incense, bath salts, and other items are quite popular and can be found in most occult shops to this day. For examples of the Seven Sisters products, click below: