To Raise A Storm: Witches And Weather 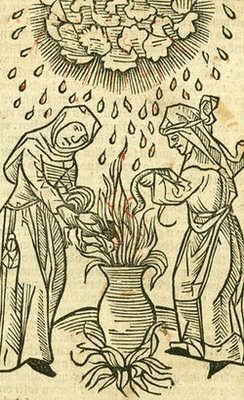 "Second to flight, the witches chief power was the power to control weather. Witches were constantly accused of manufacturing hailstorms to destroy crops, or of creating tempests that sank ships, or of conjuring sudden hurricanes to spread fires or otherwise wreak havoc on their neighbors. Sailors feared women who whistled because of the sympathetic magic implied in "whistling up the wind." And the association between chaos in the macrocosm and chaos in the microcosm that we find in King Lear's howling tempest (and other Shakespearean storms) was in fact an association between devilish doings and huge storms that dated back to the Middle Ages.

The witchy blighting of crops with hailstones may in fact be a remnant of the attributes of the Mother Goddess, condensed (if we may pun so) into the figure of the witch. For the power to make nourishing rain or blighting hailstones is again a form of the power to increase (or blast) fertility. The witch is a rainmaker, a snow maker. Is there an official Witch of Aspen?"
-Witches, by Erica Jong

One of the things witches were famously credited with was raising storms to kill their enemies or destroy their property.

Below is a traditional spell used by witches to raise a storm.

Wet a rag with water so that it is soaking-wet, i.e. don't wring the water out. Beat the rag against a stone three times while saying;
"I knock this rag upon this stone to raise the wind in the devil's name. It shall not lie until I please again!"

If you so choose to perform the following spell, might I recommend playing the following song in the background, as you do so? It is 'Cursum Perficio' by Enya. Just listen to it and try not to visualize an approaching storm. The song starts out like a calm, beautiful day and then halfway through the tone changes dramatically, just like an approaching storm. It would definitely set the mood.

Email ThisBlogThis!Share to TwitterShare to FacebookShare to Pinterest
Labels: Witch