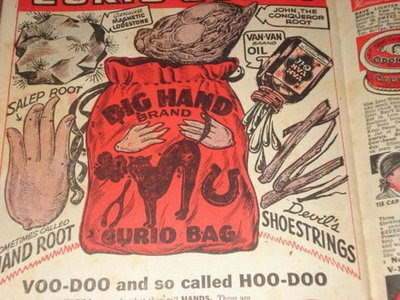 Picture Is From A Vintage 1940's King Novelty Co. Hoodoo Catalog In My Collection

Hoodoo, a.k.a. Rootwork or Conjure, is a spiritual system composed of a mixture of African-American, Native-American, and European folklore, folk magic and folk medicine within a primarily Protestant Christian religious framework. Hoodoo is practiced primarily in the Southern portion of the United States.

Setting lights (burning lamps or candles, a.k.a. "candle magic"), burning incense, sprinkling powders, fixing mojo bags, taking spiritual baths, and reciting Psalms are common rituals of Hoodoo. Such rituals are undertaken to draw luck, love, money, protection, or to gain revenge. Other standard rituals include those designed to uncross an individual or client, which is a ritual designed to remove a curse or jinx, carrying lucky pocket pieces such as a rabbit's foot or four-leaf clover, wearing of magical perfumes and colognes, and the creation of 'doll-babies' or 'voodoo dolls'. Practitioners make extensive use of roots, plants, stones, dirts, and other items from nature as well as mundane household items, or items easily obtained, for any number of magical or medicinal rituals.

Professional practitioners of Hoodoo, those who take on paying clients, are referred to as Root Workers, Root Doctors, Hoodoo Men & Hoodoo Women, "Hoodoos", Conjure Men & Conjure Women, Conjurers (pronounced "conjurs"), Two-Headed Men & Two-Headed Women, Goomer/Gummer Men & Goomer/Gummer Women, and Black Gypsies. Rarely one might find practitioners referred to as Spiritualists, due to the connection between some practitioners and the Spiritualist Church Movement. A more generic term for a professional is that of "Spiritual Worker".

A very common occurrence is the false equation of Hoodoo to the religion of Voodou (Voodoo). The difference between the two is mainly that Hoodoo is a system of folk magic with practitioners being mostly Protestant Christians. Voodou, on the other hand, is a religion unto itself.

The practice of Hoodoo has influenced American culture via music, primarily Blues, movies, and folklore. In the Southern portion of the United States the phrase, 'Don't Make Me Put Roots On You!', is an often heard quaint reference to the practice.


The 2005 movie, The Skeleton Key, was based primarily on Hoodoo, though it's portrayal of the practice was anything but accurate.

References to Hoodoo in television shows include; Buffy The Vampire Slayer, Angel, Supernatural, and TrueBlood.

Hooodoo In Theory And Practice

To learn more about what practitioners do, listen to the Hoodoo podcasts at the site below.


Also, be sure to browse my section under the "Hoodoo" label at the end of the blog for more of my blogs on Hoodoo.
Posted by Doc Conjure at 7:42 PM